I left for the Learning Forward Conference in Vancouver yesterday and, since I left, I have received two messages – loud and clear – that I need to “disconnect” a little. Now that word means many different things to different people and in different situations. My meaning for it is pretty simple in this context and, as I thought about it this morning, I believed it was a great message to share with my fellow participants here at the Conference.

It began when I boarded my first flight from Hartford, CT yesterday. I have traveled quite a lot in my career but was taken by surprise when I ascended the stairs to board the plane (yes – walked outside to get on the plane), was greeted by the Pilot who, admittedly, I thought was a flight attendant in the moment, and found a plane

with 18 seats – 9 single seats each side. Definitely the smallest commercial plane I have ever flown.

Now, when I get on planes, the first thing I am doing is opening my computer, finding how the WiFi works, whether I need to pay, and getting to work. Needless to say, there was no WiFi on this plane. This became my first opportunity to disconnect. I put on a Jim Oliver recording, meditated for ¾ of the flight and contemplated what and where I was going this week and how I had gotten here in the first place. It was the most productive 60 min I have had in quite a long time.

What was even better was that I was present (the word “present” has a whole bunch of meaning right here) to witness, as we approached Montreal, a 4th grade student sitting just across and in front of me and who was on his first trip outside of the US. As the clouds cleared and we were making our approach, I noticed he had yet to see outside the window. Having heard him earlier express his excitement to his Mom and Dad who were in the rows in front of him, I leaned over and said, “Hey buddy, that’s Montreal right down there”. His eyes lit up as he excitedly called to his Mom and Dad and they all shared in a wonderful family moment. I would have never had the opportunity to watch that unfold if my face was stuck in the computer screen.

My second message came during this morning’s run.

As I started the run, I did the usual…started up my playlist – headphones on, head down and get running.   You know, being a productive runner.

About ½ mile into the 7 mile loop, I caught the pic below (also featured above):

That was the first moment on the run when I realized, wow; I should probably be paying attention to something other than the running.

Then, only 1 mile into the 7 mile loop, my iPhone died.  It was too cold and the battery went dead.

From that point on, I noticed and experienced so much more than simple exercise.

I heard a half dozen different birds calling in Stanley Park, I saw the morning mist rise and give way to Grouse Mountain and Mt. Fromme. I listened to water fall from the high ledges on the western side of Stanley Park looking out at English Bay.

The run meant so much more without all the interference and noise that typically coincides with my routine exercise.

So, what’s the message?

Well, to my fellow participants and presenters alike here at the Learning Forward Conference this week….

While here – in the midst of all the new learning and meeting of new people, the networking and attending of events and functions, the great sessions you will attend, and all the materials and resources at vendor tables you will discover – stop and take some time to… not be productive. Instead, take time to see and listen to all that is happening around you and disconnect from being “productive”.

Disconnect a little as often as you can and see if it might lead to something even more productive than what you had planned out of this trip in the first place.

Let wonder and excitement guide you this week and, if you do, let me know how it worked for you.

As an educational community, it is time to reconsider our current approach to educator evaluation. Changes made over the past five years have turned performance review into a series of events strung together to monitor either teacher or leader performance within a school.  This narrow definition has been promoted by well-meaning policy makers and reinforced […]

ReVision Learning’s Collegial Calibrations professional learning model is design to support development of the knowledge and skills required for deeper instructional analysis and quality feedback to teachers about their practice. 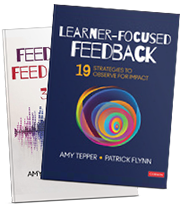